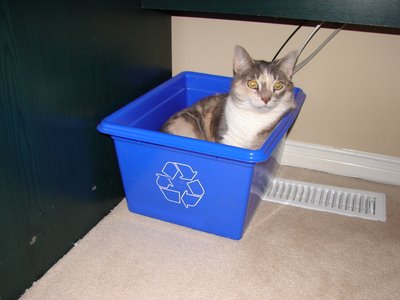 Introducing one of the loves of and in our lives - CoCo our "faded Calico". Isn't she a sweetie? But then I am biased of course. She is a true lap cat, though not in this picture. Apparently, she wants to be recycled.

CoCo is roughly 8 years old, I say 'roughly' because she was about a year and a half, when we got her in 1999 (I think). In any case, she was one of three siblings - Pepsi, Coke, and Sprite. She was Coke. When she was at the Pet store, she was with one remaining sibling, Pepsi. Sprite had already been adopted. We always understood that these little pookers had been the receivers of verbal abuse (the owner would literally scream into their little faces. So, because of that, they all had behaviours resulting from that verbal vomiting. At the Pet Store, Pepsi remained at the back of her cage, huddled in a blanket, looking totally frightened. Coke, on the other hand, came over to the cage door, and wanted to be petted so badly, and would rub along the cage door and purrrrrr so loudly. We fell in love, and brought her home. Hence was the introduction of CoCo into our home.

Our home, every inch and crevice of it, belongs to our kitties (we have 2, and BJ has been in some earlier posts, and is due for updated recognition). CoCo is notorious for finding many and varied spots for resting in.....

CoCo in her basket 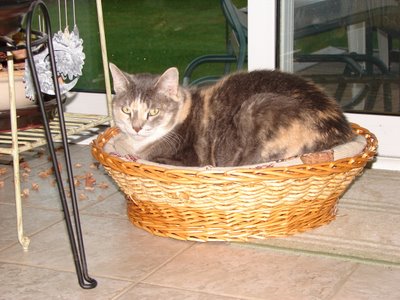 CoCo on top of the world 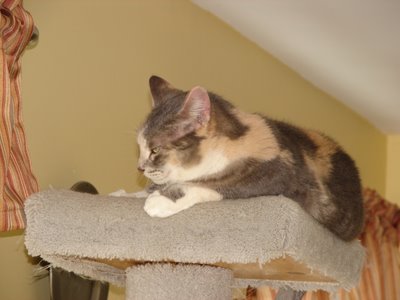 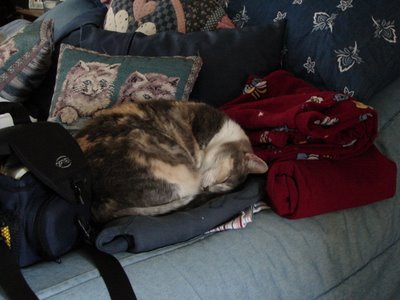 CoCo got such a rough life....yawn....and hey! Throw some more recycling paper over me will you? It's bright in here! 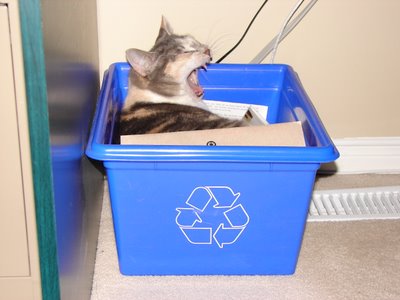 i feel it only fair to warn your readers that the "Crispi Minis" on the sidebar really taste like lightly seasoned cardboard...ptooey!

roadkill - taste in in the mouth of the beholder! Recommended are the caramel and the popcorn flavors.

Go ahead and take that recommendation if you like your cardboard in caramel and popcorn flavours...

Thank God. There IS life in the blogosphere today :)

Coco is such a beautiful kitty. My favorite picture here is the one of her curled up on the couch.

GRRRR to her previous owners. I have zero tolerance for irresponible pet owners.

barb - CoCo thanks you for the copmpliments. She is a little darlin'.

tg - well, who do you think road kill is?

I like the first picture of Coco best, because of those immense eyes.

Isn't she something? I have another post of fluffies, but I thought I'd give it a break in between...waiting for one of those 'I don't know what to post' days.

barb - that couch is our bed....another popular spot for snoozing.