That title should say it all, but it does not. It's not winter...not yet anyway. We are still, technically, in Fall (or Autumn). Outside, however, it certainly looks and feels like winter.

On Saturday, we got dumped with a foot of snow (and it continues to snow as I write this post). Remember how I was whining about how the Christmas spirit has eluded me so far? Well, with all of this beautiful snow, I am starting to feel somewhat Christmas....and I did say somewhat.

What I do mostly feel is very lucky that I am in shape, because for anyone who attempted to shovel out their driveway yesterday, I suspect there were a few calls to the hospital for heart assistance. That snow was extremely heavy. The snowblower did most of the work, but what I did manage to do was to shovel part of the driveway and all of the front porch. That was sufficient for me thank you.

The snow that is currently falling is supposed to dump even more snow overnight.

I did manage to snap a few pictures of the white stuff before the snow plows came by. Enjoy! 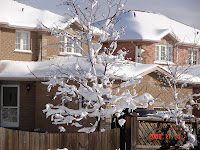 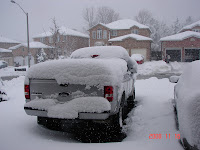 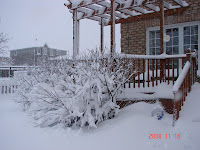 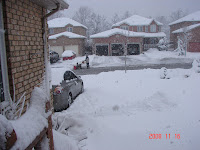 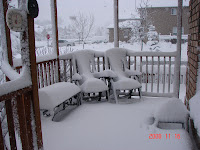 Not kidding! I have written a number of posts about our mattress, and the problems we've been experiencing.

At the end of my last mattress post It's Not In My Head, I mentioned a smell that was emanating from the new mattress. This smell has not really disappeared, even though we tried airing it for the past few weeks.

It's a rather disgusting smell, and between My Sweetie and I we describe it quite differently. He describes it straight out as mold (mildew). I describe it as fried food.

To add to all of this, since we don't know what the smell is exactly, we worry about toxins. Thanks to our wonderful global market, where everything that we buy is produced elsewhere in the world, it is quite possible that the materials used in this particular mattress may not have been top quality. And we get to breathe that crap.

Anyway, not to belabour the point, we are getting yet another new mattress in two weeks.

btw....when I said that we were going to get a new mattress, this translates into a replacement mattress. The company will be coming to take away the existing mattress and replace it with the same model. In other words, we had an original mattress which got replaced, and now we are having that replacement mattress replaced.

Not Really Feeling It

The season has suddenly switched. We just finished Halloween, not even 2 weeks ago, and already, some of the homes in our area have sprouted Christmas lights....and red ribboned bells. The gym has some Christmas decorations at the entrance.

I have to say, I am not feeling it. Not yet anyway. Maybe it's because Remembrance day was just yesterday, but to be fair, US Thanksgiving hasn't even arrived yet, and neither has December.

Very soon, we will have snow, and that usually spawns more of a Christmasy feeling. But right now all I can say is 'bah humbug.'
Posted by masgblog at 9:57 p.m. 4 comments:

As if we didn't have enough computers in the house, it became apparent that another addition was on the horizon. We've been thinking about this off and on for awhile now, and I had considered asking for one for my birthday, but then thought that the money could be better spent elsewhere. As with all things, whim turned to reality, and yesterday, we brought home Silver (my nickname for the new HP Notepad....complete with Windows Vista).

Let me recount exactly how many active computers are in our home. For starters, we both have work Notepads (neither of which belongs to us. If we lose our jobs (God forbid), then we lose those machines). We each have a personal Desktop (purely for the space capacity). Actually, one of us (not me) has a separate Desktop machine (totally built from scratch) for gaming.

Okay, so we are up to 5 machines I think.

We have a very old Thinkpad that we've been using for the boat. That machine is now quite old, very slow, and, at this point, may not serve much more use than being a boat anchor.

Enter Silver. She is a simple yet pretty machine, with a 15.6" screen. The main purpose for this baby is to keep it mobile. We don't want it attached to printers and docking stations. It is meant to be our free-to-move, on-the-spot search machine, instead of having to run upstairs whenever the Web is needed.

Now, as with every new piece of technology, nothing is ever really plug-and-go. There were a few screams last night, all circling around the router's evasive username. Steam began to form upstairs. The air turned a vivid blue color. We needed to engage the wonderful world of global tech support, which accidentally disconnected us, not only once but twice. Hours later, and hopefully a few lessons learned, Silver was connecting to the Internet.

Right now, I am making this blog update from my comfy couch. The sun is trying to stream through the window, and the satellite radio is tuned to an accoustic guitar channel.

One thing. These types of purchases are never conducted while we sit in comfy leather chairs with lattes being served. No way. Instead, we struggle with numbers and decisions while standing in an aisle beside some cash register/computer terminal, under the harsh glare of flourescent lighting. Maybe in the future. Way!

The Day After Halloween

Halloween is over, and it was a bit disappointing. Everything was ready. I had made 100 goodie bags to hand out. The front porch was decorated. We had dressed up as hippies. The weather was perfect.

Well, almost perfect. The kids didn't come. Sorry, a lot of kids didn't come. Last year, and in years prior, we had anywhere from 75 to 100 little creatures visit. Not this year. For some reason the numbers were down. It was closing in on eight o'clock, and we started handing out 2 and 3 bags just to get rid of it.

When we decided to pull the pin on everything, we stayed dressed as hippies and went to a favourite local restaurant for dinner. That was good.