Drum Therapy for the Soul 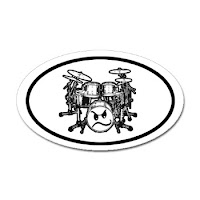 These are some new and exciting words in my vocabulary.

In my construction of a (ahem) new life, I have uncovered many things that even I did not know were there...and, obviously, other people didn't know they existed either...playing percussion...backup singing....and now drumming. The drumming just sort of happened....I think. I had intended to pick up guitar lessons again, but for some reason, I couldn't get my head around that...not yet anyway.

But first, a little background.

My childhood saw me as a typical little girl, but shy...horribly shy. I only spoke when spoken to, and even then it was minimal conversation. In that world of shyness, I took refuge in the world of toys, and though I really enjoyed Barbie dolls, I really wanted to play with some of the boy's toys ...like toy forts and garages.

I also wanted to play with drums.

When I moved to The Cottage, I saw an ad for Drum Lessons in the local paper. I was curious. This was my opportunity. My kick at the can. So, I called and we agreed on a time for an intro lesson. As the day grew closer, I became more and more excited.....and a bit nervous, as you can well imagine.

The house where the lessons take place is an old mansion turned into apartments. There are 3 levels to the home. The drummer and his family live on the top floor, while the bottom floor is rented out (I know this, because I was welcomed by one of the tenants (in his bathrobe) who advised me to try upstairs for the music guy (eeeek). So off I went to try and find Drummer Bob.

At the very top of the house is the attic...which is also where the magic happens. Here, there are vintage drums and drum kits, some of which were purchased at yard sales. The teaching area is set up with one set for the teacher (a $10,000 set of beauties) and the student set (beat up, toned down, but still quite appropriate for learning). The walls and slanted ceiling are covered with LPs, pictures, posters, and other memorabilia from Drummer Bob's career (he has travelled extensively and has played with David Usher and Honeymoon Suite).

After an introduction to the teacher, the instrument and technique, I sat for the very first time behind a drum kit....right foot settled firmly on the bass, left foot settled on the Highhats.....and 2 very nervous hands gripping the sticks.

Then it all came together.....repetitious and rhythmic whacking, hitting, slamming, all with the intent of uncovering which limbs provide the most power....and then to have each limb work independently, and vary that power (think it's easy? Try it...).

What also resulted was a tremendous feeling of release....release of all those bad feelings, stress, everything. It all came whooshing out of me and placed itself onto the snare skin. I was rejuvenated. I felt liberated.

I felt at peace in this new-found toy.

I was going to write about my Introductory Drum Lesson, but another, more pressing, topic, required addressing.

My Cleo is reincarnated and appearing at my patio door. Not quite.

Some of you remember Cleo. She was the smartest, most attentive little Tortie. She was my most favoured kitty of all the kitties that we had (well, okay, BJ has maybe now taken first place as my Numero Uno, just because he has been there for me through everything). Cleo went to kitty heaven when she was 17 years old, but she had a grand life, I think. She was spoiled, as was I, but gave back in so many ways. She would greet us at the door when we would return home from work. She was a talker, and could respond to words spoken to her. She was a huge cuddle monster, and would let me snuggle my arms around her at night. To this day, I still miss her very much.

Back to the present. *sigh*

Yesterday, I was fiddling with things around The Cottage. When I went to the back of the house, where my bedroom is located, I spotted a Cleo look-alike. She was a Tortie, of course, and had the same coloring as Cleo. She was a smaller, younger version, but her eyes had that same quality that Cleo had......curiosity and inquisitiveness, darting from location to location, trying not to miss anything.

She was sitting quietly at the patio door. She was peering inside, tying to see what she could see, and looking like she might want to come inside for a visit (which would NOT have been a good thing, seeing as BJ is the resident cottage kitty). When I went for my camera, she took off in search of flies, so I couldn't get a snap of her.

....but just wait until next time...and I think there will be a next time.

New discoveries will provide excitement for you. This day will be a stimulating one that will hold many pleasant surprises and outcomes. If you are not flexible, this could be nerve-wracking. Teaching, lecturing, performing, selling, demonstrating--any activity that puts you in front of the public in positive ways are where you can be found this afternoon. Your wisdom and the way you portray your ideas to others will help guide people at times when you may not know. Time is on your side this evening . . . whatever you involve yourself with now will be successful. Perhaps after such a busy day, you will enjoy some form of relaxation. Certainly, any strain in a love relationship will benefit from your relaxed undivided attention.

This is my horoscope for today. For all of the non-believers and non-subscribers....pfeh! You can stop reading right now. :)

Lately, my daily horoscopes have been pretty dead-on. For me, this particular horoscope was just screaming for a post today, because it is just so, so, accurate with regard to the performing aspect.....at least my interpretation of it anyway.

Tonight I will have my first drum lesson on a full drum kit. This has been a secret passion for me, which only a few people know about........and now you guys.

When I listen to music, I usually use my hands in some sort of drum banging motion...tapping on the table or whatever. When I do the percussion thing, I usually incorporate some form of tapping with the Cabasa.

Then, one day, there was an ad in the local paper for Drum Lessons, so I called to inquire. This is purely experimental at this point, but I am going to give it a whirl.

Quite a few people have been choosing this term lately when referring to my circumstance....."adjusting to my new life". When I actually sit down and reflect on what the words mean, it is ironic. I mean, we only have one life. We are born into this world once. We don't get a second life or a new life. We have the same old life that we had, only different. That said, we may get a second chance at making a different life, whether we like it or not.

I prefer to say making a different life for myself. The key to that phrase is "for myself". For the past 6 weeks, and actually for the 5 months prior to that, I have been carving a new path in my life journey, because, after all, it is a journey.....my journey....an unshared journey with unique experiences. Each day presents something new to challenge me, be it small or large, and somehow I'm not doing to badly.

I have earned a few things about myself that I never knew before.

I am thankful for this once in a lifetime opportunity, and I am grasping it with both arms extended.
Posted by masgblog at 1:56 p.m. 3 comments:

A Freebie a Week

There is an antique shop closeby, which I visit regularly. The shop is quaint, and packed with all kinds of treasures, well, treasures to me....they may not be treasures to someone else. Since my house is old, I have found a few things that fit in well here. Today I picked up an antique mirror, which has a cubby for keys.... for an insanely low price. I also have the most perfect spot for it too. As I was leaving, I spotted a sterling necklace chain, one which has the most unique linking that I have ever seen....again for an insanely low price.

But, even though I manage to find something to buy, the highlight of the day is always the freebie part. One day, I was given a sterling silver heart that had an opal in it. Another day I was handed an antique money bank. Today, it was a Victorian sterling locket look-alike.

A freebie a week keeps the antique geek happy and meek.