The other night, I was at a meeting where this fellow was brought in to speak on a specific topic. At first the talk interesting, and I was paying attention until a part of my brain clicked into something that was happening. I noticed that he would add the words Know-What-I-Mean at the end of each and every sentence. Actually, when he said it, it sounded like knowhudamean.

At first I thought that it was just a habit, and that he would soon abandon it. That didn't happen. Those words were there each and every time....and he was on a roll.

Now, by this time I was now fully drawn to the words rather than the message. Well sort of. I would drift back to listen to what he was saying, but at this point he was fully off topic and was now rambling, and my mind was now counting each instance of those words.

He used Know-What-I-Mean about 76 times. 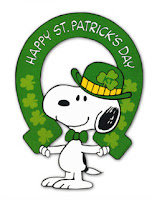 Here is what is on my Saint Patrick's Day mind today....

Even Google is dressed up for the day. 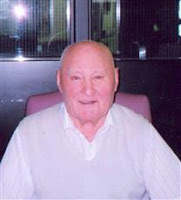 Passed away on Saturday, March 13, 2010 at the age of 86. Born July 10, 1923 in Drohobych, Ukraine. Proud veteran of the 1st Ukrainian Army Division "GALICIA" (WWII). Retired employee of American Motors (Chrysler) Canada and proud member of CAW Local 1285, Brampton. The family would like to extend their thanks and gratitude for the kindness and care provided by the staff of Ivan Franko Home. Thank you to Appleby Drive neighbours for your thoughtfulness and assistance to Stan. A special thanks to Dori and the Reinhart family for your concern and friendship to Stan over the years. Visitation for Stan's friends and co-workers will be held on Tuesday, March 16 from 7-9 pm at the Andrews Community Funeral Centre, 8190 Dixie Road, Brampton (North of Steeles) (905) 456-8190. Private family interment. Donation may be made to the Heart and Stroke Foundation or the Canadian Diabetes Association.

Tonight I went to pay my respects to Mr. Stan's family. It was important to do this. Some of the Appleby neighbours were there, and we reconnected. That, too, was important.

*Sleep well, Mr. Stan. We were lucky to be your neighbours on Appleby, and you grew a lovely vegetable garden. You will be missed.*
Posted by masgblog at 11:15 p.m. No comments:

I have missed her so very much, and her hubby has been a rock for her as usual.

I guess virtual energy pooling pulls through sometimes......thank you all!!

My BFF has been in the hospital all weekend with something very serious. It sounds as though the doctors are being very thorough before releasing her.

I miss her very much, and so want her back to her normal life.

If you do believe in a Higher Power, please send prayers.
Posted by masgblog at 12:26 p.m. 1 comment:

A young lad slips on ice, falls backwards, hits his head, and dies from his injuries.

Our local music world is saddened.
Posted by masgblog at 11:11 a.m. 3 comments: