For My Honorary Sister, Pat

This is not easy for me to post. I just got the news today, and I can hardly believe you are gone. I just spoke with you on Friday, and now you are no longer here. Dealing with this shock is very hard for me right now. We had become so close, almost like a second family. We knew that you were ill, but were always hopeful that you would get better. Now we know that wasn't to be.

Our thoughts, prayers, and love are with Will, Bonnie, and of course, Sammy, who will miss his Mommy terribly. Most of all, I will miss you but will never forget you.

Maybe time will heal this deep hole in my heart.
Posted by masgblog at 3:28 p.m. No comments:

My ideas are a bit thin this week, so I thought I'd recap another boating experience, though less personal in nature.

Recently, we were working at the boat, installing the Captain's new chart plotter. While going to the car for something, we looked out over the water, and saw a huge power vessel being towed into our marina. Of course it was windy that day, and because of the boat's freeboard (that is to say, much of the boat is above the water), the wind just caught it and resulted in the boat swaying from side to side, and made it generally difficult to handle. We continued watching to see where the boat was going to be tied up. We assumed the gas dock, but instead it was being towed to the haulout area, which meant that it had to pass through the marina. Since we have a channel slip, we thought it was best to be onboard to fend off if need be. This turned out not to be necessary.

Once the boat was tied up, we went over to get the poop (pardon the pun for you Popeye fans...get it poop as in poop deck) on what happened. The vessel was a brand new 48 foot yacht (we discovered that it's worth is in the million dollar range). It was new and the owners were on their first cruise. They had many pieces of technology on board - including radar - but no chartplotter (like a small computer to display your position on marine charts). Their friends had instructed them to proceed on a pre-determined bearing which would have taken them out to open water. Unfortunately, they failed to take into account that a bearing is only a direction and they were on the correct bearing BUT about 150 yards too far south. So intent were they on following their bearing they missed the channel marking buoy and cruised over a rock shoal at a speed of 22 knots (44 KMH). They were lucky not to damage their hull, but they did manage to demolish the two huge 20" diameter bronze props and struts, and bend two 2-1/2" diameter stainless stell shafts. All needed replacing. Our guesstimate of the damage - about $30,000. This was also their second "grounding" this summer. I think they need a chartplotter: cost $469 and up.

The name of the boat: Disposable Income II

How does that saying go again? All the money in the world???

Have a fantastico weekend everyone. Cheers!
Posted by masgblog at 10:20 a.m. No comments:

I love that song, and that's pretty much what we were doing on the way back to the marina yesterday.

'Cruisin on a Sunday afternoon'.

We spent the weekend "on the hook" at a quiet bay. We met up with old friends, met some new ones, swam, kayakked, and generally kicked back on this beautiful day of rest.

Of the two days, Sunday was definitely the most exciting. The morning started out with storm activity in the sky. This activity didn't last very long, nor did it curtail the escalating heat in any way. It was quick and rolled over us like a steamroller. When the weather had passed, it was soooooo hot. Because it was so hot, we decided to leave as late as we possibly could, since it would only be hotter back at the marina. There was no wind, so it was a motor trip back home. The diesel engine usually starts quickly, but today was a little slow. Once it did start, we were good to haul anchor and leave. We were traveling along, when we noticed a very quiet yet piercing sound. At first, we thought it was coming from someone's signal on the VHF radio,but we later realized that it was us, although it was difficult to track where this sound was coming from. It was so faint. It appeared to come from the engine area, and would get louder when we would reduce the RPMs. Once we got out of the channel, and into open water, we shut the engine off. My Sweetie went to check the engine compartment, and discovered an engine oil leak. There was also oil in the bilge. That pretty much ruled out the possibility of us motoring home. There was also NO wind, so that also ruled out a sail home. At this point, to our port, one of the local ferries was approaching to enter the channel. To our starboard, there was a small power boat out for a dinner cruise. We hailed the power boat for assistance, and, after explaining our situation, we threw them a line and they began towing us south. We then radioed our friends, who had departed with us, but were now further ahead. We also explained our situation, and they advised that they would return to meet us and tow us the rest of the way to the marina. We also called our marina, since we would later require assistance at the dock.

The tricky part was approaching the marina entrance. We had to remain tied to the towing boat until we close enough to the dock, then release the tow line and steer the boat toward the dock, and cast lines to gas dock staff. This maneuver was successful, and the boat was tied to the gas dock for the night.

It's good to have friends who will go out of their way to help you, no matter what. It's also good to know that there are still people out there who will help you, even if they don't know you.

That's the boating community in general.
Posted by masgblog at 8:35 a.m. 2 comments:

If You Have To Ask, Then You Probably Don't Know What It Is

Here's a mini scenario for you, but first....Happy Friday, fellow terrestrials. It's a hot one outside, so it's best to be near a cool spot with plenty of water to dive into.

Scenario from yesterday:
I was trying to remember who was asking about a certain work related tool/product. I'll refer to the tool as GNAT (Gosh Not Another Tool). I speak to a few people during my day, and so I thought I might have spoken with UserB (not to be confused with killer bee or worker bee). I pinged (Instant Messaged) UserB. The following conversation unfolded (without the g'days, how are ya's, nice weather, and assorted related blah blah's).

Me: Were you the person who was asking about GNAT?
UserB: What's GNAT?
*pause*

Now my first thought was, well, if I have to tell you what GNAT means, then you probably don't know what it is, and you're probably not the person I was looking for! But, on better judgement (or stupidity), I explained what GNAT was.

Me: GNAT stands for Gosh Not Another Tool.
UserB: I don't know what that is. Sorry.
*pause*

So, I almost ended the chat session, but not quite.

Throughout this screen messaging, all of UserB's conversation had html embedded around it, like so:

I was seeing this type of screen scrabble with each message typed. UserB could not see this, and sounded disbelieving. So I sent UserB an email, with a screen image, to convey what I was seeing on my end. I tried to advise what was happening and how to remedy the situation. It was a simple setting switch.

Instantly, the famed chest beating bravado/machismo explanation surfaced.....
Oh! I'm using a beta version of blah blah.
hmmmmm......to me, it sounded as though the settings couldn't be changed (but they could). UserB didn't want to pursue how to change this totally unappealing look. So, I wished UserB well, and ended the chat.

A few seconds later I received the following:
UserB: Thanks for the heads-up on the html tags.
*pause*

Some days are just like that I guess. I think I need to go on a shoe/purse shopping spree.
Posted by masgblog at 12:11 p.m. 1 comment:

Today is a happy day here in Sleepy Hollow.

My sweetie got a promotion!

This is extremely nice news.

As we say at the gym, that deserves a woo hoo or two.

After our conversation yesterday, two Bambi's for you..... 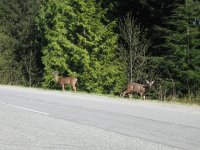 Blah, blah, blah. It's Friday. Yup, okay. I have spent the entire day, since 8 o'clock this morning, with the telephone handset attached to my ear. What's worse is that most of the conversations have involved a whiney individual, vile natured, and frenzied.

Food has been at a premium for me today, and even hand delivered to me, since it is virtually impossible to get to the kitchen. The bad part about this is.....I HATE the phone. Always have, always will. That will never change for me. Right now, all I can do is hope that I can have this earpiece removed from my head.
Posted by masgblog at 3:17 p.m. No comments: 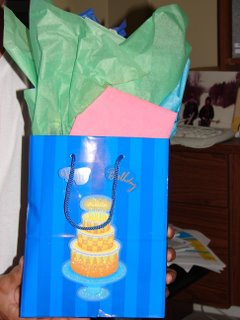 Somebody special has a birthday today (no reference to George Bush)! So go crazy, open that goodie bag, eat birthday cake, and celebrate!! Happy Birthday, my sweets! xx