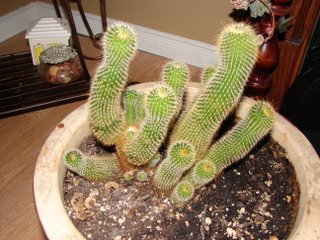 My Sweetie and I will be married 25 years next year. We've experienced so many wonderful things during that time together. Also during that time, we've collected (there's that word again) a number of plants. Some of the plants are more recent acquisitions, such as the huge palm leaf from my Mom's funeral, but we have some others that literally have been with us since our marriage and before (as shower gifts).

One of these little babies we refer to as Fallic Boy (I changed the spelling to save my poor blog from the AdSnoops....so it should really be p-h-a-l-l-i-c), a little cactus (now no longer little). Named Fallic Boy because this particular cactus had no other limbs except for one.

Of course, a little background.

Fallic Boy has been around for between 20 to 25 years. He was a gift from my Mom and Dad (notice it has a gender) has moved with us from Montreal to Toronto to our present location, and he survived. Well, he survived, but not without a few accidents along the way. If I remember correctly, he may have been dropped, at least once which would have resulted in a major damage to his little limb. What once was one not-so-little fallicy, ended up being a number of smaller fallic type shoots.

So Fallic Boy ended up with brothers all co-habiting in the same pot. I think the pot may have changed form time to time to accommodate the Fallic family growth, expansion, and sproutation. Sort of like kids outgrowing their cribs, and moving into big-kid beds.

So, exactly where was I going with this? Probably nowhere, but I doubt if anyone who has a cactus will ever really be able to view it the same way ever again.

I really want to visit the desert.....hmmm.

LOL. You're the only other person I know of that has a cactus other than my grandmother. I fell on the darn thing once when I was small and won't ever forget it. Funny thing with the "name" connection though. I guess we know now a bit more about you than you intended??? LOL

Is "sproutation" a word? lol! If not it should be.

OH you added a picture! I see why you call it (him) that now.