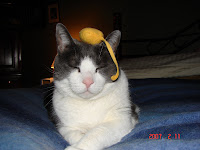 How do you like that for a picture of an unhappy kitty with a little yellow mousey sitting on his head? Well, he was a tad unhappy in that picture and he has been slightly unhappy lately too.

Yesterday, BJ, our only remaining kitty, went to the vet. He had been walking around favoring his right side, and we became increasingly concerned. He looked uncomfortable, and we had no idea what was going on. So we made an appointment for him. Both of us were nervous as to what they might find, but we were adamant that he would be coming home with us that evening.

The trip to the vet is always an ordeal. He constantly mroooooowed during the drive, but at least he didn't poop, pee and puke the way poor CoCo used to do.

When he got there, he became Mr. Curious, exploring every surface and corner, and then he turned on the charm for the staff. They were particularly taken with his little pink nose (so are we hee).

Now, mind you, he is 15 years old, that dreaded old age number for a cat, so we shouldn't really be too surprised that he may have ailments associated with aging, but BJ's behaviour is very much like that of a kitten sometimes. When we still had CoCo, she would, at times, appear older than BJ.

In the end, BJ came home with us and got lots of cuddles and treats. He is just an old guy who has a bit of arthritis linking back to an injury that he had a few years ago, when he got his foot caught in a crevice in the basement and had to have one of his toes amputated. When his foot got caught, he probably twisted his knee as well, hence the difficulty later in his little life. He was never quite the same after that I guess.

But at least we still have him, hopefully for quite some time.
Posted by masgblog at 10:20 a.m.

BJ and I could or should compare notes on arthritic joints! My knee acts up on me frequently - due to an old sled riding accident almost 50 years ago! The back and arthritis there stems from too many years of hard labor as a waitress. Poor kitty! I really can empathize greatly with his ailments. Wonder if he can forecast weather changes from his joints too? I can. (Well, sometimes, anyway.)

Glad it was just a minor old-man complaint. Hope he'll be around for years yet.

glad to hear the news is good. he DOES have an awesome nose!