In an early post Chasing Cars I mentioned how I love cars, and that I have only owned three cars in my lifetime, and that My Sweetie has driven (not necessarily owned) zillions. Actually, I lied. I never owned any of the three cars, since, for whatever reason, they have always been in My Sweetie's name. I have merely had the opportunity of driving them...endlessly.

Back to the zillions of cars. Today, zillions became zillions plus one. 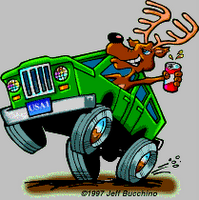 Now, I am not jealous or anything (yeah right), because this is a truck, and too big for me to ever consider driving anything like that. It's a nice truck. It feels like a truck, and rides like a truck, but it looks like a really nice truck. A big boy truck. It even has heated car seats (yay me!).........(I sense a future post coming, but I have to work on the semantics first).

Zillions. Okay, so over the past 30 years, we figured that, on average, he managed to have a different car every 2 years. Not bad I say. And, since we are still young enough to have our memory in tact, we were able to recount the cars of the past.

Wow. I thought that we had forgotten one there, and we probably did, but no matter. This is the tally as it currently stands. Now, next year he will probably be getting a new company vehicle, again. *sigh*

Now, I just found him in the garage, bonding with the new vehicle, reading the Owner's Manual. *sigh*

My ex used to almost caress his car when he washed & waxed it. I often thought if he'd treated me that well, my might have stayed married ;)

Me again haha. I was just scrolling your sidebar and seeing the book that you're STILL reading made me want to tell you that I just ordered 35(!!!) books online. They should last me a couple months.

I have a decent list of cars on mine. But the thing is is that most were used. Living in the area that I did, the insurance was very high. I never minded used cars though, I can fix most anything and have lol.

This blog got me to thinking about cars I have owned.
Bought my very first car in December of 1967 - a brand new 1968 Chevy Nova, with a sticker price of $2,619. The reason it was "So High" was that it came with white wall tires, which I had the dealer exchange for the regular ones to give me a price break. What a wheeler dealer I was, huh?

When I married in 1972, I had that car paid off - I think it was only financed for 3 years back then. My husband (now my ex) and I had more vehicles between 1972 and 1980 when we divorced than you could shake a stick at!

I then purchased in 1986 a used Ford Fairlane and had it for 2 years till it died.

Six cars over darn near 39 years now, all but one was brand-spanking new, that I owned, in my name! Paying those cars off was often a struggle for me but I am really proud to say I DID IT, my way, the hard way - Alone!

Right now though, I may has well not have a car because my son keeps borrowing mine. The funny thing about him and my car is that he is a Chevy man, through and through and especially loves to make bad comments about Ford products. However, I notice he has no issues when he needs a good running vehicle to put his bony body into that happens to be a Ford? Hmmm. What's up with that, huh? (I think it comes under the heading there of "Beggars Can't Be Choosers" don't you?)

And by the way - Happy Belated Thanksgiving to you and have a fun Black Friday! I will - at home!

Mags, did you turn Murrican overnight?

So... just guessing here, but is the Explorer the new baby? If so, why were we treated to a cartoon clipart truck, instead of THE REAL THING?!!

tg - maybe you and Skittles can get some sort of book club going. I read way too slow to be even remotely associated with such a venture.

lattegirl - ha ha. No digital pics of the new beast yet, and I was hoping to find a pic of this on the Web, but none of them have the full cap, so the wild reindeer will have to suffice for now.