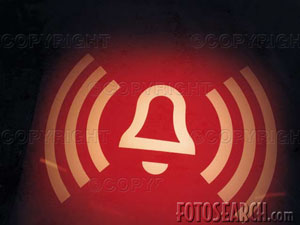 Things have been pretty quiet around here lately, since the Creepy Person (sorry barb) visited. Except for the other night.

It was a cold and windy day here in Sleepy Hollow. We both had a busy day at work, and bedtime was near. We were just about to crawl into bed, when our house alarm went off. That deafening, ear splitting sound that is sure to leave your ears ringing for some time later.

So much to describe at that particular moment. First, we were stunned, and imagined that there were people in our home who were not supposed to be there (and that is a sickening feeling). Then, after we looked at each other confusedly, and terrified out of our little skulls, My Sweetie called the police. I don't recall exactly what he said to them, it is now a blur, but I do remember that our adrenaline levels had skyrocketed at that point, and I was shaking, and thought that I was going to be sick.

We looked over the upstairs railing to see if we could see or hear anything. Nothing. We made our way down the stairs, so that we could get to the alarm box, and see what code was displayed. Then, we had to find the book that had the code information (Note to self: must remember to put that information on the box itself). The code indicated that it was the back sliding door. We could see that door from where we stood. Nothing was amiss. We walked over to the door and inspected. Nothing wrong. Then My Sweetie asked me to go downstairs to check on things. NO WAY!!!! Talk about spooky.

So we spent some time talking to the alarm people, and the police people, and the service people for the alarm, who are going to come and inspect things, since it is likely that the wind caused the alarm to go off (sensitive little bugger).

Satisfied that all was under control, we went back upstairs to go to bed, but our hearts were still thumping, we were still shaking, and our ears were still ringing.
Posted by masgblog at 10:25 p.m.

Scary, indeed. Glad nothing was amiss.

You might be interested to know -- or, more likely, you won't care a bit -- that in Mont-Tremblant, they've passed a bylaw under which all owners of alarm systems (home or business) must register (free) their system, and fines will be levied after the first false alarm... whether it was the wind or a Creepy Person.

I'm glad everything is ok there. It can be scary to think someone has gotten into your home. Especially with the creepy guy in your memory.

Lord have mercy! I'm going to be sprouting grey hairs over you next!

yikes, how do you get back to sleep after something like that??

glad it was a false alarm, though.

Now that you have the new blog page, I have tagged you to do a meme. You can go to my site and copy it. Thanks :)

ÒT: I heard that Barrie got whomped by 15 cm of snow a day or two ago. You need to update your Snow Sightings feature on the left sidebar.

hey cunada ein! - we didn't get anything like that. Now there may have been parts of Barrie that DID get snow, but not where we are.....consider the snow sightings appropriately updated with what was observed at that particular moment.

Came to see if you'd done mike's meme, but see you've been adding & moving stuff on your sidebar :)

cunada ein - not to worry, but it made me think that I would have to edit the Snow Sightings every other day, so I decided to change the format up a bit.