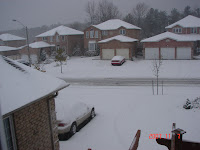 Isn't this pretty amazing. Last week, we were walking around in T-shirts, and a few people were wearing shorts. It was so mild and balmy. 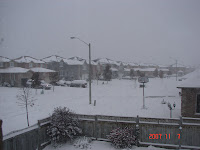 This is no joke!
This is what I woke up to this morning! 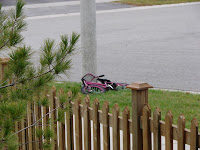 I have to post a comparison picture from November 11, 2006. We had no snow until later in the year.

A post-shovelling update - reality sets in.

So, you've seen my first snow photos and have either said 'oh the snow is so pretty' or 'blech'. I can concur with the latter right about now. I'm tired. I just finished shovelling the driveway and the front patio. This was not a straightforward task.

I couldn't locate the shovels. Not in the garage. Nope. They were in the shed in the backyard. Not a biggie, right? Well, there was about 8 inches of snow in the back yard, which, when I started to walk in it, immediately found its way inside of my boots.

So I hauled the shovels to the front of the house, to commence shovelling. The snow is that heavy stuff...heavy and wet. Great.

I started shovelling the front patio, and realized that the chairs and table from the summer are still there, covered with snow. So I cleaned them and stored them. (watch - tomorrow will be 75 degrees!).

The driveway was a chore and a half. More heavy snow (I think the skiers call this packed....pfeh whatever...it was heavy).

You might ask why I didn't use the snowblower, the nice, big, new, heavy duty, expensive snowblower? Well, since we were kind of caught off-guard with this storm, that baby is still in the backyard shed. Gosh, I had enough trouble getting the shovels!!! Plus, I am gas operated machine challenged. I have troubles with gas lawn mowers, the outboard on the dinghy, the whipper snipper, and of course the snowblower.

So, I am done with my rant. I am going to have some soup, and a good sob.

Oh, by the way, I blame this snow on our neighbours, who, on the weekend, put up all of their exterior Christmas decorations. I hold them responsible. So there.

You might also notice that this is all written in the first person...I. We won't say where My Sweetie is right about now....will we? It's a private joke. 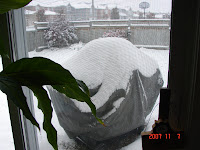 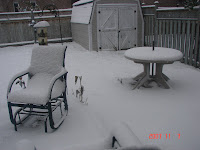 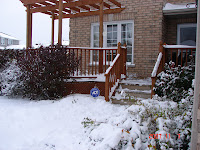 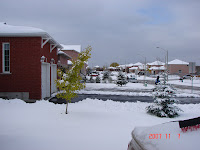 You can count me as one who said "BLECH" at the snow pictures! Although the scenes were pretty to look at and all that sugary stuff ya know, they still remind me of what is to come here over the next few months. We did have flurries here yesterday and today but thankfully, NO ACCUMULATION! Thankfully, I no longer have to worry about shoveling the parking area out front nor do I have to worry about getting to work on time either when the roads are all snow or ice covered, ect. -although the SIL and my dear daughter still have that crapola to deal with on their plates. Better them than me is all I can say to that -or I already paid those dues over many years in the past!

Oh dear! I bet your bleh snow is on its merry way right here to my doorstep in Farnham! It's friggin cold and windy and allright miserable outside and has been all day. I have no clue where the shovel is..... Yesterday was a lovely day!

Considering that I haven't seen snow in over 10 years, I think that a little bit looks dreamy. However, I must admit that I want someone else to shovel it for me and I want it gone within 48 hours.

Oh my, I do think I remember you saying on the weekend that everytime your sweetie goes away we get a storm.
Well tell him that she should not go away any more.

It seems to have bypassed us... for now... and I don't even own a shovel! (Chances are I won't need one here anyway. Apparently one of the tenants is paid to clear our walkways.)

Sorry you got loaded down with all that work!

Blech is right...and I'm a skier! OH and the snow broke my patio umbrella! like you we didn't get it away in time.