Last week was most excellent, imho. So much has happened, and because of that it appears that we are approaching the end of some of my favourites.

Well, we are down to the final two (ahem) ladies. Gosh, they look alike, well sort of, except that one is skinny and the other is a bit plump. Maybe that's why he's so confused. Brad has decided that it's either Deanna

Quite frankly, I don't give a hoot. Neither of these was my pick at any point, so it's all his making now, and I hope he's happy....heh. 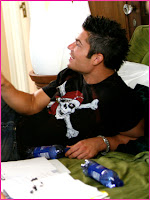 Beauty and the Geek

This show is down to the final four couples. Last week, there was no tie-breaking challenge in order to send people home. Instead, 2 of the winning couples had to outright decide which couple was going to go home. And did they pick the couple who did not get along, and really wished they could go home? No. They got to stay and torture each other for another week (that is if they don't kill each other first).

were sent home. The show was partially successful in that John now resembled a shadow of his former geeky self. I guess it's a lesson to us all...get along with everybody, no matter how much they kiss-up (or don't).

The show is now down to the final 6. Sarah

went home last week, amid a sea of tears. She was supposed to be the Plus Size girl. One problem. She started to lose her Plus Size figure. Yes ladies and gentlemen, she lost some weight AND she actually started to look good. However, the judges were hoping that she would have kept her wee bit of flab on so she could have been an example for the Plus people out there. I still like Heather. She is my underdog.

Survivor: China
What did I warn you about Jean-Robert

eh? That poker faced pro poker player lucked out and was sent home. Yes, lucked out means that luck was not on your side. Now the tribe appears to be gunning for double immunity holder James, Gravedigger James (somebody has to do it!) who I am currently rooting for.

The Amazing Race
The Amazing Race 12 began, and Ari and Staella were the first couple eliminated. Not a great loss. They were both a little whiny, and they were already grating on the nerves, in one short hour. The footage of Ireland was most excellent though.

Mau - got the knitting pattern fine and dandy - haven't started anything yet - but hope to dig into it sometime Sunday - since I will have the house all to myself and can concentrate on it then! No little fingers messing around with my work that way - LOL

ANTM: Heather is the underdog, and therefore you KNOW you have to pick your second to fave last person to win this "contest."

Because Heather deserves it and will be cheated. Bet you a loonie.