This Feeds My Royalty Craving.....for now at least 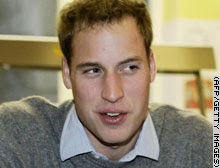 This was reported on CNN today.....*sigh*

A British bookmaker has closed its books on William and Kate Middleton getting hitched on that day after it received a number of bets the couple will tie the knot then.

"We've taken a number of large bets -- one punter wanted to place a £1,000 bet -- that the couple will marry on July 19, so we're no longer accepting wagers on that day," a William Hill spokesman told Reuters.

Earlier this week William and Kate were given an unusually high level of police security when 10 officers provided the couple with a cordon as they emerged from a London nightclub, fueling rumors of an imminent engagement announcement.

William and Kate shared a house as students at St. Andrews University in Scotland. From there, romance gradually blossomed.

Middleton, who turns 25 next week, is the daughter of affluent parents who sent her to private school and live in a five-bedroom house in the heart of the English countryside.

They run their own mail order party supplies company."
Posted by masgblog at 5:11 p.m.

Heather in Beautiful BC said...

Do you love Barb at Skittle's Place? Please check out my post then pass it on :)

He looks so much like him Momma... lucky for him :)

It's a shame they won't leave the Royals alone. Let him do his thing and be glad for the guy.

I hope to be in England if that wedding happens.

Remember, you promised to take me to England, all expenses paid (backpack with wheels) if he marries.

I'm holding you to it.

My friend from school was at sandhurst with Harry!
but he's not a toff!(working class like me! not Harry, my friend). He said Harry was a very nice bloke.
Clairex