This is a great time of year for us. The weather is warmer (or trying to be that way), and we prepare to launch our boat. To get to the marina, we travel through some nice countryside. It is very quaint and very special.

What is also very special about the trip is something I refer to as Da Bears. We refer to it as Da Bears, even though there are a number of other little animals involved. Da Bears has been going on for many years. Da Bears is a tradition which was started many years ago. I don't know how it started or why, but the tradition continues today, but here's what happens. Throughout the year, for special occasions (Easter, Canada Day), there is a display of bears that appears on a piece of property along our travel route. It is past the small town, and past the elk farm. Once we get past these two landmarks, we start to watch for Da Bears (are there bears?). The people who own the property set up a display of bears. For Easter, they had bears with bonnets, and the bushes had little Easter eggs hanging from the branches. For Labour Day, the bears were sitting at desks getting ready to return to school. For Canada Day, what else, Canada flags everywhere AND the bears were in a parade and had flags in their paws.

This past weekend was no exception. Da Bears were preparing for the upcoming long weekend, also known as Victoria Day. Now, this time I was able to take a few pictures. We actually stopped! 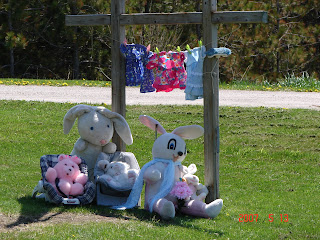 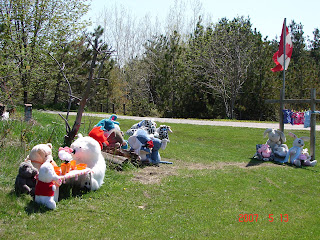 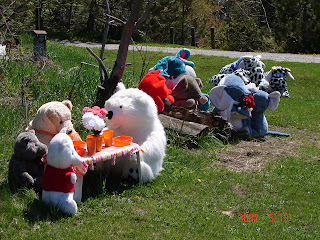 Deh bears iz cute, but deh peeplz has 2 much teym on deir handz.

Those bears certainly are cute, and they have been the highlight of our northern drive for many years.

At one point, and we heard this through an acquiantance, people would donate stuffed animals. They would drop them off at the end of the driveway (since the driveway is extremely long and the house is totally hidden behind trees). The couple would collect the animals and create a display.

I think it is quite unique, and totally selfless. I think it's a retired couple who make the most of what they have.

OK I will stop talking in lolspeak. I think it's nice that the folks do this for public entertainment.