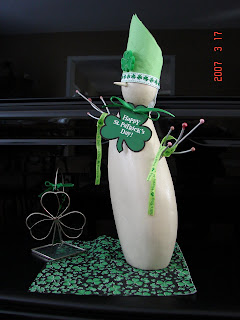 Chilly Willy wishes everyone a fantastic Top O' the Morning to all! Wee hee it's here! One of my favourite days of the year!

I love this time of year. Always have. I get to celebrate the Irish side of my ancestry, and that is always special for me. Ever since I was a little girl, my Mom would send me to school with green ribbons and bows. Each year, I get to reflect on St. Paddy's Day of years gone by. Like the following little story.

Way back in the dinosaur years, I was a studying engineering in Montreal, thus hanging with the engineering crowd (a totally crazy bunch). It was getting close to St. Patrick's Day, and I mentioned how cool it would be to enter the engineering mascot car as a float in the parade. It was a flip comment, but someone picked up on it and actually entered the car as a float.

The mascot car was a 1957 Studebaker chassis....no body, no doors, no windows...stripped to the inner workings. Sometimes the thing ran and sometimes it didn't, but it was always used at hockey games etc. Oh....there was one other thing. On the back of the things was an outhouse.

So parade day arrived, and so did we....dressed in hard hats and lab coats. We had green streamers, green toilet paper, green everything....and the outhouse was completely filled with beer.

The parade got started. Now, before the floars actually entered the main street, they all had to pass by the Parade Marshall who would review each float and sing high praise.

We arrived at the Parade Marshall.

Instead we heard that we were being thrown out of the parade. To quote 'An outhouse has no place in the Saint Patrick's Day parade....you're out!'.

We were stunned. We had more green on us than anyone else. We had high spirits (pardon pun) and were having a blast (pardon pun).

But now we were out.

And the car wouldn't start.

So, we had to have the chassis chained to the truck that transported all of us, and the beer, to the parade, and get towed off the street.

With a little tinkering, someone was able to get the car started again. We dodged the marshall, and got onto another street, and told someone that we were lost. We bypassed the Parade Marshall and got back in the parade....for a bit.

We were thrown out again by a policeman who noticed that the car wasn't licenced (did I forget that little detail?).....'OUT!' he said.

So, we were out again....but not down. We went around another street, and managed to get back into the parade again. This time we stayed until the end. People knew of the university and the outhouse on wheels, and were cheering and happy to see it in the parade. We were thrilled to be back.

Then , at the end of the parade, the Canadian reserves were regrouping, and the Head fellow, maybe Sargent or whatever, looked at us and said...quote 'a fine lot of dirty looking buggers you are. Couldn't even get dressed up for the Saint Patrick's Day parade!'

But he was wrong. We were dressed up. This was our regular garb....lab coats and hard hats. Tools of the trade.

I guess none of them 'got it'.

Meh, some people don't know how to have fun.

I admire your determination!!! I bet it was fun! Willy looks good decked out in green :)

Happy Saint Patrick's day to you too...

Happy St. Paddy's day to ya. I have Irish blood in me too. Of course, that shouldn't surprise either of us. ;)

You can email me at montagnu@gmail.com. :-)

I love how you dressed up Chilly Willy for the day! Too cute.

Can't read the rest of the post - the dark green on dark blue is tough my my old eyes.

Happy St Patrick's Day to you too. Hope you and ur family have loads and loads of un.

Goes to show you should never try to outsmart a bunch of engineering students.

Well done, I say! Actually sneaking back into the parade 3 times... bravo!