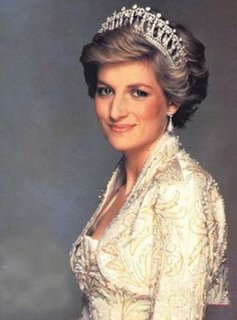 Everybody knows who this lady was, and it was nine years ago that she was a victim of that tragic car accident. When she came into the public eye, people were drawn to her, as they were with her engagement and marriage. I was (still am) a huge fan, both of her and the Royal family. I have books and articles that I collect and read (don't want to use the word hunted as was used in the media), and I miss her presence to this day.

Now, many people remember where they were when they heard the sad news. We were with two other boats, and it was the following morning. The neighbouring boat had the news on. I was just waking up in the V-berth, and all I could hear was 'Princess Diana and Dodi' while they were speaking. I thought that they had eloped or something. Then My Sweetie, knowing that I was a huge fan, came to tell me the news with tears in his eyes. Time was not the same after that. It was occupied with newspapers and TV news and magazines that seemed to publish something new every week.

Sometimes it seems that time just flies, and you know, it probably does.
Posted by masgblog at 8:42 a.m.

I saw the headlines in the paper the next morning, and I do believe my jaw dropped. Like the towers, the idea just didn't seem possible.

I know what you mean. I am still a fan though. There's a new book coming out too, the butler tells all, again.