A Day Full of Dragonflies and A Dog on a Boat

Today was the end of a really nice weekend. There was good wind for a quiet sail back home. The water temperature reached 25 degrees Celsius (worthy of a woo hoo!!), and that made for a refreshing swim. There was no rain (also worthy of a woo hoo!!). The weekend also had its share of dragonflies. They came on-by-one but they also arrived as though they were going onto Noah's Ark....two-by-two. I tried to get a close-up picture of one, but they never seem to stay in one place for very long. I guess that they had places to go, creatures to see.

The other highlight of the weekend, was the most adorable dog. He spent most of the weekend sitting in the dinghy, apparently watching for things in the water (my guess is fish). He also really enjoyed leisurely resting with his head comfortably nudged against the stern. 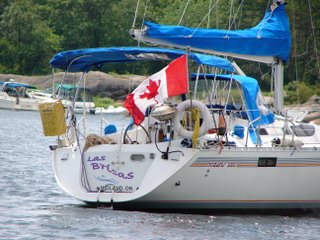