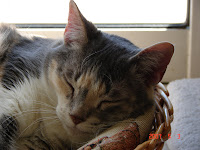 Today has been a sad day. It's very difficult to do this.

Too many tears. Too much ache.

The day started with our beloved Coco kitty not behaving normally. Not eating or drinking, and generally looking uncomfortable. We kept an eye on her, but she was looking as though she was in pain. My Sweetie brought her to the vet, twice actually, since they were busy on the first emergency visit. When they checked her out the second time, she had a large mass in her stomach. They said they could have operated, but a positive outcome was unlikely.

There was no option but to put her to sleep so that she would not suffer.

Coco, was a special kitty. I remember when we got her. We were at the PetSmart, where they had the section for adoptable cats. She was one of three Calico kitties - named Pepsi, Coke, and Sprite by the previous owners. Sprite had been adopted, and Pepsi and Coke remained. Pepsi was a very scared kitty, but Coke (later to be renamed CoCo) came to the side of the cage and rubbed and rubbed and rubbed as if to say "Love me", "Take me home".

And so we did.

When we got her home, to become the fourth of the feline family, she didn't know quite what to do, so she proceeded to find the top shelf of the nearest clothes cupboard, and gaze down upon the world beneath her, while she burrowed down in an old comfy quilt. Little did we know, that this once scared and timid kitty would blossom into the beauty that we knew her as.

She was a total lap cat. If I sat on the couch, she was sure to join within 10 seconds. Not today though. She could only manage to huddle into a more or less comfortable position on the floor.

She would always come to sleep with us. She would usually start on my side, behind my butt, and eventually would saunter over to another more inviting area. Last night was the last time she slept with us.

Both of us are stunned and in shock at what has happened. We cannot get our heads around this one. There were no signs. She was as normal as anything prior to this.

So, as I write this, My Sweetie and I, with BJ resting on the floor beside us, are editing this to pay homage to CoCo.

She was a very special kitty to us. She was one of our kids.

We will miss her. We already do. 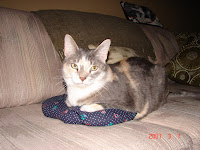 We were very sorry at The Rising Blogger to hear of the loss of your cat, CoCo. A previous post of yours was nominated and today and awarded our Post of the Day. Those of us involved with our site were conflicted as to whether to hold off on your award or not.

We were equally moved by today's post. It was your post from November 19, 2006: “Look Through Any Window” that has been selected as our Post of the Day on “The Rising Blogger”. It is a new site that awards posts, not blogs. We will email your winning badge and all our info, if you’d like to provide an email address. To reach “The Rising Blogger” site:

Again, we are sorry for your loss. God bless.
Judd Corizan
The Rising Blogger

I'm so sorry, it's really hard to lose a pet, especially so suddenly like that.

I am so sorry to hear your sad news. The loss of any pet is like losing a family member and CoCo sounds like she was such a loving part of your lives. Nothing I can say can help I know so shall just send a {{HUG}}.

Having recently (back in November) lost a pet - my son's big, loveable lug of a mutt, Andrei -and knowing too how much my kids, grandkids and I love our cat, Gracie (been with us for almost 16 years now), I know how much it hurts to love a pet. They are as much our "babies" as are our children, then grandkids. My condolences on your loss. And, it makes no difference how long it's been since a pet left a family either, the void remains. I know because I still miss my sweet old pup, Duffy, who died in June of 1963!

I am so very sorry for the loss you are feeling over your beloved CoCo.

Pets do become 'our children', and to lose a family memeber is such a difficult thing to go through. As time eases some of the pain, the memories you shared with CoCo will become more beautiful.

Know that I will be thinking of you and hoping that the pain lessens in time.

I'm so sorry for your loss. Losing a pet is never easy. She was a lucky kitty to have had people like you.

Just popped over to see how you are....hope the little award on my Million Stories blog will give you a smile.

Oh my God. My heart is broken for you and your Sweetie. Poor, poor CoCo.

This very same thing happened to one of my son's (Tiggerbob) cats. No warning. A large mass. No alternative.

I know the loss you feel is enormous. You have lost one of your family. My thoughts and prayers are with you.

I used to tell my kids that pets go to Pet heaven, which is right next door to Grandparent heaven.

I know this is a really bad time, but I just named you as a Rockin' Blog Girl.. and there's a badge for you..

I stopped by from Jeni's blog and I wanted to express my condolences to you on the loss of your beloved cat, CoCo. It sounds like she was a beloved feline friend and I am sure that the ten years that you had her with you went by in a flash.

I've heard that pets go to the Rainbow Bridge to wait for their owners and I am sure that CoCo is in some excellent company while she waits for you there.

Take comfort in the wonderful memories you have of her for nothing can take those away.

Oh I am so very sorry to hear about the loss of your cat....our pets really do become part of our family...even if at times they seem to get under foot....those are the times we will miss.....again sorry for your loss...

I am sorry for your loss. It truly hurts. Try to think positive and never forget Coco. He knows he was loved.

She was a beautiful kitty and you had ten years of love. My sympathies on the loss of a member of the family.

I just love the picture of her at the top. You know my heart aches for you and B. both. I know how you guys have loved your cats, given them special beds and toys and climbing structures... I think kitty heaven is at your house. But if there's another kitty heaven, then CoCo and Cleo are together, talking about what great humans you were for them both.

Just thinking about you...

Since I became a pet owner in the last 2 years, I am really sensitive to stories like this. I am so sorry your kitty was sick.

Mau, I'm truly sorry for your loss. I know how much it hurts to lose a pet. :(

I'm sure Coco is looking down at you and your sweetie from her comfy old quilt in Heaven. :)