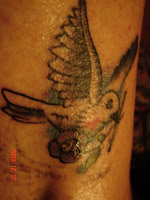 For as long as I can remember, I was curious about tattoos. My parents used to take me to Belmont Park, an old amusement park in Montreal, and I remember seeing the tattooed man, actually I stared intently at the patterns that flowed across his body.I wondered how the patterns got there.

When I grew up, I was still always attracted to the various tattoos that people had etched on their bodies. Art...yes it is actually considered art. You know the ones....the guys with the snake on their arm, or entwined hearts, or mom or whatever. Now the tatts tend to be full blown and colorful...quite stunning.

I never seriously considered having a real tattoo, until this year, and especially after I received my henna tattoo in Mexico. I really liked the idea of having a piece of personal expression on my body.

In the summer, I had visited the recommended establishment to check out the facilities for piercings and tattoos. At that time I wanted my ears pierced over and above the tattoo, but I knew the tattoo was waiting in the wings. In the end I had my ears pierced at another shop, partly because of convenience and also because I had a friend who supported me. I have not regretted the ear piercing...absolutely one of the best things that I have ever done for myself.

When I recently went to Mexico, as a whim, I got a henna tattoo on my ankle. It was a simple bird and flower tattoo, and was guaranteed to last 2 weeks. I liked it so much that I wanted to have it as a permanent reminder of my trip. So, I had it designed with a twist...the bird has a flower in its beak along with a drumstick. See pic....oh and there is still a hint of the henna which will eventually fade.
Posted by masgblog at 4:07 p.m.

I remember Belmont Park too. LOL

Colour me stupid, but what body part is in the photo? Supposed to be the neck?

Mau - you wild woman you! I think it's awesome that you got a tattoo! I've considered a tiny one on my ankle too but never had the guts.

You wild and wonderful woman!!!