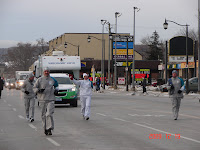 Nothing I do is simple. This is just a fact, which includes my not-so-simple chance to see The Olympic Torch, which was going to be in G'town today. Here is my story.

The hype had been building in this little town, hype around the arrival of The Olympic Torch. It was supposed to be here around 7AM, and within walking distance of where I live, so I planned to basically dash out of bed with camera in hand. It was great to see that others also stumbled out of their beds so early on a Saturday morning. It was minus 12 outside, and keeping the body moving was the order of the day. I found a couple of good spots on what was thought to be 'the route', set up my camera, and then started to have problems, first with the batteries (and I had no charged ones with me either doh!) then my camera froze. I tried everything I could to get the thing to warm up and behave, but nothing was working, so I headed home.

Once home, I found some new batteries, and let the camera warm up a bit. Everything was operating so I headed out...again. By the time I arrived at the corner, I could see the Olympic vehicles passing by....and everybody was leaving. I had heard that The Torch made its way to the downtown area, then they packed it in to head to Acton....no relay between G'town and Acton (I didn't think that they did, but a friend was adamant that it was a continuous relay all across Canada).

I was now sad that I missed my opportunity, but this sad moment didn't last for long. I headed back home and jumped in the truck and drove to Acton........about a 10 minute drive away. Once I got far enough along, I could see the Olympic vehicles ahead....and then just as quickly, I saw the police barring any other vehicles from entering. I was locked out with no way into the town.

I recalled that The Torch was going to be in Milton after Acton...so off I went. At this point Milton would be about 20 TO 30 minutes away, I had no idea where anything would be but I guessed that the action would likely be somewhere in the downtown core.

There was a large gathered crowd. I saw the person who was going to take The Torch for the next scheduled leg...and finally I saw The Torch itself, along with the sponsor vehicles providing crowd hype. Just a great feeling to be among others who braved the cold to feel the spirit....screaming, yelling, dancing, jumping...all active and united to see The Torch and keep this alive.

Your persistence paid off and I'm sure it was such an amazing moment for you. =)