A certain post, over at Inner Dialogues, reminded me of a couple of stray kitties that My Sweetie had befriended over the years. Perhaps they befriended us. No matter. We named one of the kitties Scottie and the other Buster.

Both of these cats had been owned, at least that is what we were led to believe, and the owners had decided that they no longer fitted with the family lifestyle. So they were left behind to fend for themselves.

Scottie was the first to land on our doorstep, and would come by to visit for quite a few years. When Scottie died (we assumed), Buster started to come by.

We'd give food and water, and because they let us, they'd let us approach so they could be petted. Now, it wasn't like the cats were there all the time. Sometimes they would disappear for a few months, and them reappear one day at our front door. Sometimes, I'd be doing the dishes, and would look out and there would be a body....sitting at the door....hoping to get some food. Or I'd hear the famous Mmmmmmmrrrooooww! I knew that was our call to action.

One of the last times we saw Buster, he came to visit with sores all over his body (probably from fighting). Festering sores. One of the sores even had a branch stuck in it. We knew we had to do something. He was suffering. He even let us put him into a spare cat cage that we had. The vet said that he was in pretty bad shape, and we bid him farewell.

There is a phrase 'Cats leave paw prints on our hearts.' This is imprinted on a rock that sits on my cat shelf.

This is so true...and it doesn't matter whether it's our own cat or whether it's a passerby, because whenever I think of the cats that have have popped into our lives, my heart aches. 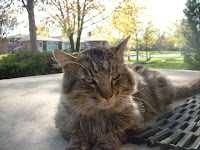 On behalf of us sucky cat people, I thank you for this sweet post. It reassures me to know that you have been as big-hearted as I am when it comes to strays.

Buster was a tabby like Joey Bigtoes... Joey's a little paler in colour and has really big ears and larger eyes.

A friend today said she bets anything that Joey will find his way back here, but I doubt it... that's a lot of hilly, wooded terrain to cross. *sigh*

We nearly had a cat give birth in our trailer. I really wanted to keep a kitten (she delivered them in our neighbors yard instead)but my dad's allergic so my parents had to veto that idea, and any other cat idea I had.

Ah, cat people! My younger daughter and my son are true cat people. (Older daughter and I lean more toward dogs but love cats too.) We've had a myriad of cats though over the past 33 years in our home -currently we have two - Gracie who is a 16-year-old semi-senile beautiful fluffball of black fur with gold speckles and Nina, an orange short hair who is about 6 months old now. If Nina doesn't soon quit swatting the grandson's feet (which are almost constantly kicking the base of his high chair, silly toddler that he is) and scratching his toes, she may find herself relegated to other places, perhaps becoming an outside cat with some inside privileges. LOL

The other day while driving around we saw (dead) Lab on the side of the road who obviously had been hit by a car. I cried then, too.