Meet Adam van Koeverden. *sigh*. Canadian kayak athlete, and our medal hope in kayak racing at the Beijing Olympics. *sigh*. He carried the Canadian flag at the opening ceremonies. *sigh*.

A couple of weeks ago, there was a picture of him in the newspaper, and I had to dry out the newspaper afterward from my drooling.

Anyway, like tennis, I love kayaking. This time I can say that I really do. Now, I don't do long distance kayak stuff, and I only have my little 10 foot plastic kayak, but I love tootling around the bay.

Actually, this is my third kayak in about three years. The first kayak was an 8 foot sit-on style. It was alright, but the tracking was awful and My Sweetie got very wet as soon as he sat in it. We needed something that would be suitable for each of us.

The second kayak was a 10 foot sit-in. I fell out of it twice, and had a helluva time getting both in and out of it from our sailboat and from the water (after falling out). 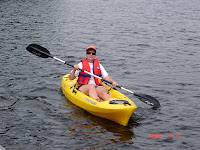 I've never been kayaking-it sounds kind of fun though.

I dunno, I think I still like the tennis player better. *old leer*